Georgianna Oguis, a PhD student and up and coming scientist at The University of Queensland takes us under the microscope to learn how plants can treat people.

Georgianna Oguis, a PhD student and up and coming scientist at The University of Queensland takes us under the microscope to learn how plants can treat people.

To reduce the risk of resembling a zombie, many adults start their day with a shot of caffeine. Or two.

This aromatic substance that plays a major role in many of our mornings is a by-product of other organisms’ will to survive. The plants!

Because plants cannot run nor hide, they keep a massive chemical arsenal to protect themselves from predators such as insects. Their weapons are loaded and ready for dispatch once the insects attack. Caffeine is but one of thousands of chemicals that make up this arsenal. Everyday scientists are on a mission to discover the weapons plants use and pick out which ones can be beneficial to our health.

Researchers are currently interested in one type of weapon — a family of small circular compounds called “cyclotides.” Only a few groups of flowering plants have been discovered produce them. The pansies and petunias that we find in commercial shops like Bunnings produce cyclotides. All non-flowering plants like pine trees, and plants belonging to the grass family such as rice, do not produce cyclotides. These non-cyclotide producing plants have other methods to protect themselves.

Like many plant chemical weapons such as caffeine, cyclotides are so tiny, they are invisible to the naked eye. But these small defence molecules are certainly able to keep the insects away — possibly by creating holes through the insect cell membrane. 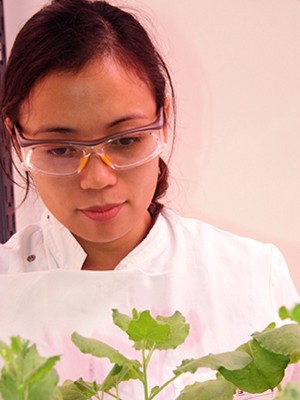 Credit for the serendipitous discovery of cyclotides in the 1970s can be given to the Norwegian doctor, Lorents Gran. During one of his trips to Africa, he noticed that a certain tea made from boiling the leaves of “kalata-kalata,” a native African plant from the same family as the coffee plant, promoted labour in pregnant women. Cyclotides turned out to be the main reason.

In the 1990s, scientists were able to use new equipment for studying complex biological structures and a team led by Prof David Craik from the University of Queensland discovered that cyclotides have an interesting three-dimensional structure. They are not only circular, they are also knotted! It immediately occurred to them that the circular and knotted structure of cyclotides make them remarkably stable. This means that their three-dimensional structure remains intact even at harsh conditions –which explains why the cyclotides in “kalata-kalata” leaves remained active despite the boiling.

Over the years, the interest in cyclotides continued to heighten. Numerous studies have shown that there are over 300 cyclotides found in more than 60 flowering plants. Decades of scientific research has also shown that on top of protecting plants from insects and other pests, cyclotides can also kill a number of disease-causing germs and tumours. More recently, scientists have been looking into using cyclotides to treat deadly diseases in humans like cancer or obesity, simply by changing a small region in the cyclotide structure.

One of the problems in using medicine to treat disease is that our bodies are designed to destroy anything foreign. Many compounds which are as small as cyclotides — but do not have the circular and very sturdy knotted three-dimensional structure of cyclotides, are often destroyed by our body’s internal security guards called the “proteases.” Yet cyclotides, with their robust three-dimensional structure, cannot be readily destroyed. This means that if we replace a section of the cyclotide with a cancer-targeting region, then you have a way of delivering a cancer treatment to the body embedded in a three-dimensional cyclotide structure — protected from the scavenging proteases. There have been numerous studies which prove that this works.

We think this means that the disease-fighting regions we can incorporate into cyclotides could be limitless! Just imagine how many diseases we can fight using the plant’s army of small defence compounds. How we can use cyclotides from plants to treat diseases

Thanks to Georgianna Oguis for her blog to help us promote the great science happening in Queensland.