Fourteen amazing young scientists and researchers from across the state have recently been selected as Young Tall Poppy Science Award winners.

Fourteen amazing young scientists and researchers from across the state have recently been selected as Young Tall Poppy Science Award winners. 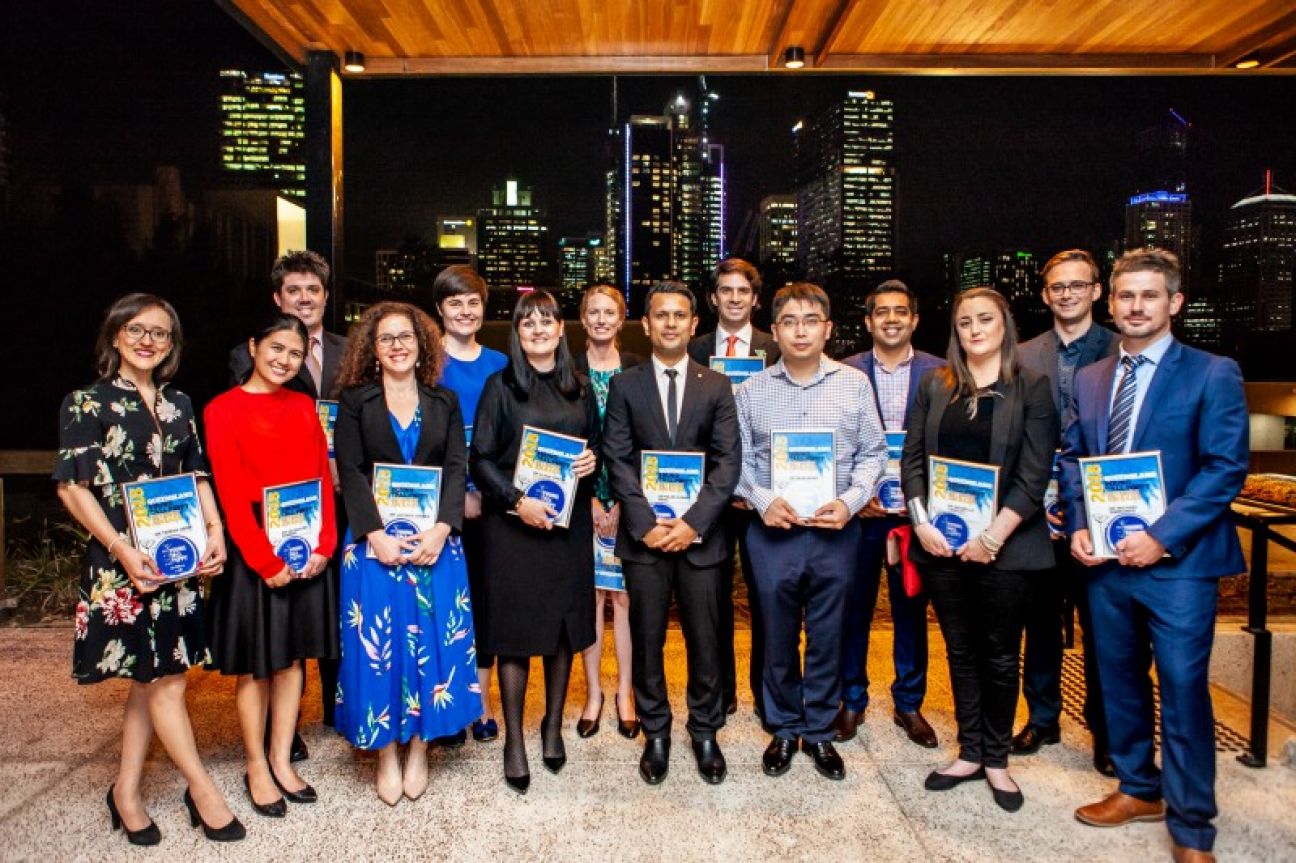 Congratulations to Dr Alana Grech from James Cook University who was awarded the 2018 Queensland Young Tall Poppy Scientist of the Year.

The annual Queensland Young Tall Poppy Science Awards is hosted by the Australian Institute of Policy and Science (AIPS) in partnership with the Office of the Queensland Chief Scientist.

These awards recognise and celebrate people who demonstrate scientific excellence and a unique passion for science communication, as well as encourage young people to enter STEM careers.

Alana uses geographic information systems to predict and map changes in coastal wildlife and habitats, with a particular focus on seagrass meadows in the Great Barrier Reef.

“My models allow me to predict locations where human activities, such as poor water quality, coastal development and fishing, are potentially damaging the environment, to help inform environmental policy and practice to protect the reef.”

Alana is Assistant Director at the ARC Centre of Excellence for Coral Reef Studies, James Cook University. She communicates her science using multiple platforms, and regularly contributes to The Conversation.

“A major focus of my research is to understand how the environment within medical devices leads to blood damage.

My work has contributed to important progression in the understanding of how subtle changes to the physical and biochemical properties of blood cells may explain common problems that occur following surgery.

‘I hope that my work with engineers and medical doctors will lead to improved medical device design, and ultimately, better health outcomes in the months and years following surgery.”

Her research focuses on the human dimensions of environmental governance and management, specifically relating to coral reefs in the Asia-Pacific region.

“By identifying the conditions under which management contributes to people’s wellbeing and is supported by them, my research helps decision-makers develop effective management strategies that positively affect coral reefs and the communities that depend upon them.”

Hosam is a Group Leader and Research Fellow with The University of Queensland, who works in the UQ Centre for Clinical Research.

“We are developing tests that can detect multiple superbugs rapidly and deliver results in a few hours. These tests can potentially help to treat patients faster.”

“The inappropriate use of antibiotics, such as with cold and flu, is fuelling superbugs. We have launched campaigns to educate people around the world about antibiotics and superbugs.”

Hosam’s research has been covered in TIME Magazine, National Geographic and other Australian publications.

Jacqui is a DECRA Postdoctoral Fellow at The University of Queensland who works at the Centre for Engineered Quantum Systems.

“I am doing experiments to show how the shape of photons can be used as an alphabet to improve communication, computing, and more.”

Last year Jacqui received one of four L’Oreal Fellowships, gaining national exposure for STEM in magazines such as Vogue and Marie Claire.

James is a Senior Lecturer from QUT who is developing flexible, plastic-based batteries as he knows that portable power is needed everywhere — from cars to smart phones.

“For future applications like clothing, electronics need to be cheap, environmentally-friendly, light-weight and durable.”

James has developed engagement projects for primary and high school students. including the Vice Chancellors STEM Camp, which brought year 11 students from regional Queensland to QUT and gave them hands-on laboratory experience.

Michelle is a Research Fellow with Griffith University, working in the Australian Research Centre for Human Evolution.

To help us understand how we became human — who we are and where we came from — Michelle studies early tools, ornaments, art and weapons.

“I am also working to create a greater understanding of Australian Aboriginal bone technology, by studying items such as spear points, ornaments and fishhooks.”

Michelle proposal that children have been largely ‘missing’ from our archaeological narratives of the deep past has received broad media interest, with invitations to write for the ABC, as well as numerous radio interviews.

Qilin is an ARC DECRA Fellow and Lecturer with Griffith University.

“This technology can help substantially reduce greenhouse gas emissions while the generated energy can be converted to electricity to put into the grid or power cars.”

Qilin was named as one of the top 10 innovators under 35 in Asia for 2018 by MIT Technology Review.

Rajib is a Senior Lecturer and an Advance Queensland Research Fellow at the Institute of Resilient Regions, University of Southern Queensland.

Rajib is researching the use of machine learning for early detection of the mood changes which are typical of mental health issues and relapses.

“Early diagnosis of relapse enables clinicians to provide support before hospitalisation, reducing the burden on the hospital system and providing patients with the best chance of maintaining education or employment.”

Rajib offers time at coding clubs and schools to inspire careers in STEM.

Róisín is a researcher in the Griffith Institute for Drug Discovery at Griffith University. Róisín searches for chemicals that make bacteria harmless without killing them, to find antibiotics that are less likely to lead to resistance.

“Melioidosis is very challenging to treat. New medicines that offer shorter, more effective treatments could greatly improve the care of melioidosis patients in Australia and elsewhere in the world.”

Róisín was recently awarded an Australian Science Policy Fellowship and is currently working in the Australian Government’s Department of Health.

Teresa is a Lecturer in Volcanology at The University of Queensland in the School of Earth and Environmental Sciences.

Teresa is investigating the products of volcanic eruptions: volcanic rocks and the crystals they contain.

She has developed laser technology that helps extract new information from the tiny volcanic crystals that hold the secrets of what triggered eruptions in the past.

“Our new laser science has the potential to unlock the secrets these crystals hold and help improve volcano-monitoring efforts in the future.”

Amirali is a NHMRC Career Development Fellow at The School of Pharmacy, The University of Queensland.

Amirali is developing a novel nanoparticles-based treatment for Inflammatory Bowel Disease, which affects around 75,000 Australians, has no cure, and requires life-long medical treatment.

“My research has led to new oral treatments to efficiently target gut inflammation which would potentially reduce the current challenges with injections, frequent doses and side effects. Importantly, this technology has the potential to improve the quality of life for millions suffering from Inflammatory Bowel Disease around the globe.”

Amirali is passionate about inspiring young Australians about exciting opportunity offered by nanoscience and regularly visits schools to provide presentations about the impact of science, especially nanotechnology, in our daily lives.

Sean is an NHMRC-ARC Dementia Development Fellow at The University of Queensland and works at the Queensland Brain Institute in the laboratory of Associate Professor Massimo Hilliard.

Sean is researching the brain and how axons, which enable communication between the billions of cells in our brains, need to be protected and maintained to work properly.

“I have discovered that the tissue surrounding axons is critical for their integrity and can actively protect them from damage. Understanding the molecules important for this protection has the potential to help understand how injuries and neurological diseases can be prevented or delayed.”

Sean is a presenter on the children’s science series, Get Clever, enabling him to communicate the wonders of biology to wide audiences.

Jacinda is an ARC Future Fellow at The University of Queensland.

She’s an atomic theorist and her research lies in the precision approach for new physics searches.

She attempts to answer some of the biggest questions in science:

“A better theoretical understanding of atoms may also lead to developments in precision technologies, such as atomic clocks for time-keeping and improved navigation systems, for example, GPS.”

She recently presented at the Pint of Science Festival to bring this highly complex area of science to general audiences.