Leptospirosis is a potentially lethal disease in humans that occurs all around the world (except in polar regions). In Australia, the highest rate of incidence is in Queensland, particularly for people who are exposed to river, stream, canal, lake water and floodwaters contaminated with the urine and tissues of infected domestic and wild animals. The Leptospiral culture collection at the World Health Organisation (WHO) Laboratory for Reference and Research on Leptospirosis in Brisbane is used in diagnostic pathology applications to identify bacteria and antibodies from patients and animals with Leptospirosis.

The Leptospiral culture collection consists of over 300 different types of Leptospira cultures and is one of only several collections of its kind in the world. The work of the laboratory supports the fight against the disease by providing analysis and diagnostic support to public and private pathology providers, both nationally and internationally.

The Leptospiral culture collection supports activities integral to the: 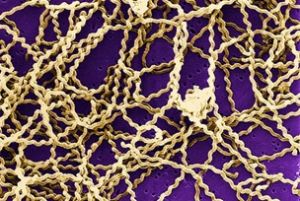 Leptospirosis is caused by the bacterium Leptospira, a helix shaped bacterium that is dependent on a high humidity for survival. It is mostly transmitted through the contact of humans with contaminated water and soil, which contains urine or tissues of an infected animal, ranging from mice to wild pigs to deer.

The disease is most prevalent in farmers in humid areas of Queensland, where approximately 100 cases are reported each year. While most cases cause few to mild symptoms, in severe cases Leptospirosis causes jaundice and can lead to kidney failure and ultimately death. The work of the World Health Organisation (WHO) Laboratory for Reference and Research on Leptospirosis in Brisbane is integral to the monitoring of the disease around the world, as well as further research into its pathogenesis in humans.

Access to the collection is limited to researchers and pathology laboratories that have Physical/Biological Containment Level 2 facilities. Researchers and pathology laboratories wanting exotic Leptospiral cultures will also need to be a Quarantine Approved Level 2 / Class 5.2 Approved Facility with staff trained to work under Quarantine conditions and who are approved by the Federal Department of Agriculture and Water Resources. Transfer Permits issued by the Department of Agriculture and Water Resources will also be required.

For supply of cultures contact the Materials Transfer Coordinator, Forensic and Scientific Services.