How do we estimate the chance of a flood occurring?

Understanding the chance of different sized floods occurring is important for managing flood risk. The chance of a flood event can be described using a variety of terms, but the preferred method is the Annual Exceedance Probability (AEP). A flood with a 1% AEP has a one in a hundred chance of being exceeded in any year. Currently, the 1% AEP event is designated as having an 'acceptable' risk for planning purposes nearly everywhere in Australia. However, good planning needs to consider more than just the 1% AEP flood.

Figure 10. Estimating the chance of floods of different size based on flood frequency analysis of historical flood records at Bellingen, NSW. There is always a level of uncertainty inherent in such analyses. For example, the chance of a flood with a stream flow of 2,200 m3/s (as arrowed, left hand axis) in any year is estimated to be between 1 in 50 (2%) and 1 in 10 (10%). This is said to be 'within 90% confidence limits', i.e. we are 90% sure that it will be in this range - with a 10% chance we will be wrong, and it will be outside this range, higher or lower. The more confidence there is in the data the closer the confidence limits (red dashed lines) will be to the estimate (black line). Courtesy of WMAwater.

The best method for calculating the chance of different sized floods occurring is statistical analysis of long-term flood records from stream gauging stations. Where a long-term flood record exists, and no significant changes have occurred to the catchment, a statistical technique known as flood frequency analysis can be used to determine the likelihood of floods of different sizes occurring at a specific site in the future (Figure 10). However, Australia's flood records do not extend far into the past, and flood events are highly variable, meaning there is still a level of uncertainty in defining such flood estimates. Climate change may also affect how much we can rely on past flood records.

Where sufficient flood records do not exist, or a very rare flood needs to be estimated, rainfall based techniques are used. These use statistical analyses of rainfall records, together with computer models based on the geographical characteristics (for example, catchment area, waterway length) of the region being studied, to determine the chance of different sized floods occurring. These models can be set up to take account of changes that affect runoff, such as new dams and urbanisation, but the computer models used to convert rainfall to runoff are not perfect, making rainfall techniques generally less reliable than the use of long-term flood records.

Both of these techniques result in predictions for peak water flows at key locations in rivers. These predictions are translated into flood levels at any point of interest in the floodplain, through the use of further computer models known as floodplain hydraulic models. 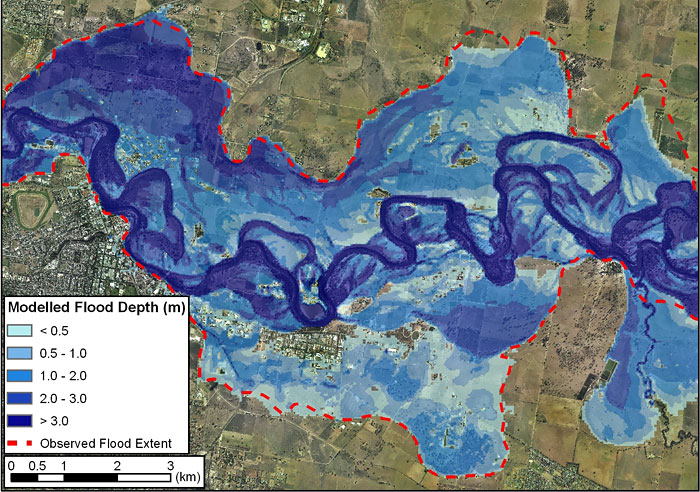 Figure 11. Post event comparison of flood extent modelled (predicted) by a floodplain hydraulic model (blue) and and actual flood event (redline) in Wagga Wagga, NSW, 1974. While predictions are mostly very good, some variations can be observed between predicted and actual (observed) flooding, e.g. in the right hand side of the image. Courtesy of WMAwater.

It should be noted that any actual flood event will vary in some manner from the theoretical events from floodplain computer models (Figure 11). Such variations are primarily due to differences in the rainfall pattern, along with other factors such as how wet the catchment was before the event, and whether the centre of the storm was over the lower or central reaches of the catchment. (See Question 2 for more on these variations.)

Other terms that express the same idea, such as 1% annual exceedance probability (or 1% AEP), are preferred because they avoid the common misconception that a '1 in 100 year flood', for example, can only occur once every 100 years; or that you are 'safe' for another 100 years after you experience such an event. For example, in Kempsey, NSW, major floods approaching the 1% AEP level occurred in 1949 and then again a year later in 1950.

In reality, the chance of experiencing different sized flood events in a given period of time can be estimated mathematically (see Table 3). If you lived for 70 years in a location that had a 1% chance of flooding in any one year (that is, it would only flood if a '1 in 100 year flood' occurred), then there would actually be a 50% chance, or one in two odds, of you experiencing at least one flood during that 70 year period. The way we calculate this is: 100% minus the chance of a flood not happening 70 times in a row, i.e. 0.5 = 1 - 0.9970.

It is also important to remember that the chance that you will be affected by a flood is not only dependent on the likelihood of your own property flooding. Floods can disrupt transport networks, impact tourist destinations and prevent food from reaching markets. With more than 100 rivers and creeks in Queensland the chances are good, when flooding occurs, that many people will be affected, either directly or indirectly (see Question 3 for more information).

In nearly all but a few locations, even the best plans are not able to fully eliminate the chances of a flood.

Nevertheless, for planning purposes, it is important to decide what level of flood risk is acceptable for individuals and the community. This should take into consideration both the chance of a flood happening and the consequences of a flood (see Question 7 for more information).

Until about 30 years ago, it was common to use the largest historical flood in an area for planning purposes, and this is still used in some rural locations.

However, currently nearly everywhere in Australia the 1% AEP event, or '1 in 100 year flood', with an appropriate additional height (or freeboard) for buildings is designated as having an 'acceptable' risk for planning purposes, regardless of the potential consequences of the flood.

There are often strong social and economic reasons for considering a higher standard than the 1% AEP flood. For example, in some locations flood levels associated with rarer floods are significantly higher and are likely to cause significant devastation; inundation of a particular location may have significant economic and social consequences for a much wider region.

For example, London is moving to a planning level above the '1 in 500 year flood' (0.2% AEP) for land adjoining the Thames estuary. Also, many parts of the Netherlands use planning levels above the '1 in 1000 year' coastal flood event (0.1% AEP), because inundation of large, low lying areas would have major consequences.