How do we forecast floods?

Weather forecasts can provide advance warning of a flood, and seasonal forecasts can alert of a heightened chance of flooding in the coming months. However, forecasting river levels and flood extent is a complex process that is continually being improved.

The Bureau of Meteorology (BoM) is the lead national agency for flood forecasting and warning services in Australia, working in partnership with agencies at the state and local government levels. The BoM provides forecasts of the water level in rivers at critical locations during flood events. Local governments and emergency agencies may further interpret the river water level forecasts and provide advice on flood inundation extent. The BoM also provides severe weather warnings that include risk of flash flooding.

In addition, the BoM provides forecasts of rainfall and river flow for the coming three months. These seasonal forecasts may help alert agencies and the public of entering a period of heightened chance of flooding.

Reliable forecasts of weather, in particular rainfall, can allow advance warning and forecasting of floods. Weather forecasts for the next one to seven days rely on increasingly accurate computer models of the atmosphere and ocean/atmosphere interactions. Dramatic improvements in the data available to such models (from satellite observations) and in computing power have contributed to this increased accuracy. In some parts of the world, three-day-ahead forecasts of heavy rain are now as accurate as one-day-ahead forecasts were in the mid-1990s.

Figure 7. Radar image showing rainfall over the South-East Queensland and New South Wales coast, 9 January 2011. The  intensity of the rain (interpreted from droplet size) is indicated by the changing colour scale. Courtesy: Bureau of Meteorology

Radar (and sometimes satellite) images can be useful for tracking areas of heavy rain and their movement (Figure 7). Rainfall in the next one to four hours may be forecast based on these images in combination with computer models. However, such forecasts give only a very short lead time for response.

The accuracy of climate and weather forecasts varies with lead time, spatial scale (or size) of the region of interest, the weather or climate variable being forecast (for example, rain, thunderstorm), as well as with latitude. Generally, temperature forecasts are more accurate than rainfall forecasts. The mid-latitudes (in Australia 30°S to 60°S) are easier to forecast than the tropics (so Melbourne has more accurate forecasts than Darwin). It is generally easier to forecast when the lead time of the forecast is relatively short—so a seven-day forecast is usually less accurate than a forecast of tomorrow's weather. Finally, it is generally easier to forecast rainfall over a large area (for example, a large catchment) than local rainfall (for example, over a reservoir). This is because the intensity of any rain system varies on small spatial scales, but the variation is somewhat averaged out over a large area.

Flood forecasts are critical to emergency responses to limit property damage and avoid loss of lives.

Flood forecasters rely heavily on real-time data about rainfall and river water levels as well as rainfall forecasts. A network of rain gauges (sometimes combined with radar images) are used to monitor rain that has fallen on the catchment. Water levels (i.e. river height) at stream gauging stations along the river are also measured. A simple river height recorder is shown in the accompanying picture. The forecasters then use hydrological computer models to work out how much rainfall will run off different parts of the catchment, how long it will take for runoff to reach the river, how long that water will take to travel from upstream to downstream, and how water from different tributaries converges in the river network. 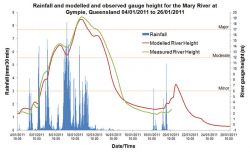 Figure 8. Modelled versus observed water heights for the Mary River at Gympie, Queensland, together with observed rainfall. While there is reasonably good agreement in this instance, as can be seen from the differences between the red and green lines, actual river height can vary from what we expect based on modelled results due to data and model limitations

Flood forecasts by the BoM are issued to emergency management agencies and the public through the media and the BoM's website. The forecasters regularly update their forecasts as new observations are made of rainfall and river water level, and as rainfall forecasts become available.

If a critical dam operation is involved in a flood event, the forecasters communicate with dam operators. Decisions about releasing water from dams take into account forecasts about how much water will flow into the dam and assessments of how water releases may affect water levels downstream. In turn, flood forecasts for downstream areas take into account water release decisions.

Forecasts of river water level are most useful when interpreted in terms of where the water is likely to spread beyond the river. Such interpretations may be provided to the public by local governments and emergency agencies, usually based on pre-prepared flood maps using historical flood data and in some cases floodplain hydraulic models (see Question 6 for more information).

New technologies are available, but not yet widely used in Australia, for providing near real-time mapping and delivery of forecast flood inundation extent on the internet. These technologies use accurate ground-elevation data, robust floodplain hydraulic models, new spatial information technology and internet map-serving software. Adoption of the technologies would significantly enhance the value of flood forecasts in Australia.

Flash floods are difficult to forecast, although technologies are available and used operationally overseas for flash flood forecasting. These technologies are generally based on monitoring of rainfall using rain gauges and radar images, high resolution rainfall forecasts for the next few hours, understanding of the catchment condition (how much rainfall will run off) and understanding of the local drainage systems (how much water is needed to cause a flood). As flash flood forecasts improve in accuracy and are integrated with communication and response systems over time, they can become highly valuable.

The BoM regularly issues forecasts of rainfall and temperature for the coming three months. The prospect of a wet season would lead to an increased chance of flooding, so forecasting seasonal rainfall can help alert us of flood risk. The high variability of rainfall across most of Australia from one year to another is largely the result of the El Niño – Southern Oscillation (see Question 2 for more information). Computer models are used to predict the development of the La Niña events that are often associated with heavy rains. However, seasonal forecasts are not highly accurate, and are expressed only in probabilistic terms – i.e. percentage chance of occurrence. For example, Queensland may have low rainfall on some occasions even in very strong La Niña events. Nevertheless, such forecasts have been demonstrated to be useful for industries such as agriculture, water resources and finance, indicating that the rainfall forecasts may also be useful for forecasting seasons with an increased chance of flooding.

In December 2010, the BoM commenced a seasonal streamflow forecasting service. This service provides forecasts of probabilities of total flow exceeding various volumes in the coming three months. The forecasts are also based on computer models, taking into account how wet and dry the catchments are at the start of the season as well as the climate. Although forecasts of floods are not directly made at the seasonal time scale, it is reasonable to expect an increased chance of flooding when total streamflow volume in the next season is forecast to be high.

In addition to the services provided by the BoM, some state governments and universities also provide seasonal forecast outputs including probabilistic streamflow forecasts in some instances.