Dr Fernanda Adame from Griffith University shares her insight into her research about mangroves and their ability to store carbon. 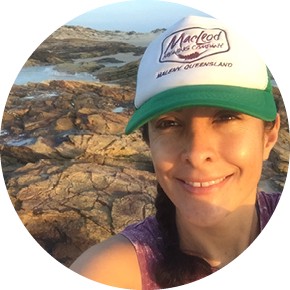 Mangroves and the Paris Agreement

In 2016, 147 nations around the world agreed to reduce their carbon emissions in the Paris Agreement. In this peak moment of green globalisation, nations committed to reduce fossil fuel consumption and deforestation. As nations submitted their Intended National Determined Contributions (a document with goals for reducing emissions), there was a significant error: mangroves were considered terrestrial forests.

Mangroves — not any kind of forest

Mangroves are flooded by tides, so mangroves are more like a saltwater lake than a forest. Mangroves differ from terrestrial forests in that they accumulate large amounts of carbon in their soil, not in their trunks and leaves like ‘regular trees’.

Think about the Carboniferous period in the Palaeozoic Era, where large swamps formed huge coal deposits. This coal is what we currently use to BBQ our sausages on a Sunday afternoon. So mangroves are like a modern coal storing machines, similar to the swamps in the Carboniferous era.

In the Paris Agreement, mangroves in Mexico were measured as terrestrial forests and the large stocks of carbon in their soils were not included.

So what does this mean? In Mexico, mangrove carbon content is 31 times larger than what was reported in the Paris Agreement.

The undervaluation of mangroves in national carbon emissions is just not a problem in Mexico. Most countries have not accounted for soil carbon in their national emissions.

Before everyone starts protesting against the government and arguing corruption in the Paris Agreement, let me explain. Accounting for carbon is a standardised process, and the forestry commission in Mexico has to comply with guidelines. They can’t justify the use of different methodologies for different forests.

In fact, the undervaluation of mangroves in Mexico means not that we are lying about mangrove emissions, but that we are undervaluing their protection. Hopefully, the results in our recently published article in Conservation Letters, will help justify the inclusion of soils in mangrove credit accounting in Mexico. This will not only benefit mangroves in Mexico but also provide a strong reason for protecting mangroves across the world from deforestation.

Did you know that in Queensland, Australia we have half a million hectares of mangroves?

Meanwhile, let’s relax and enjoy diving under 5 metres of carbon in mangrove forests in Yucatan, Mexico, or enjoy the view of mangrove channels in Hinchinbrook, Australia, where millions of tonnes of carbon are stored. At least for now.

Dr Adame is researching accounting for carbon emissions of tropical wetlands This research was supported by the Queensland Government through an Advance Queensland Fellowship, by the DiCaprio Foundation and Wildcoast.