In 1956 my mother, Barbara Possingham (nee Hall), and her friend Barbara Potts (nee Kidman), were the first women to complete PhDs in physics at the University of Adelaide. Aside from pondering the prevalence of the name ‘Barbara’ for people born in the 1920s and 30s, this was a remarkable feat. There were very few women attaining PhDs in Australia in any discipline in the 1950s, let alone physics.

After receiving a prestigious 1851 Research Fellowship and completing research in England, my mother returned to Australia to join the South Australian Institute of Technology Department of Engineering and Applied Physics. In addition to making her way in a world full of men, she also had a sick one year old at home (me) who almost died twice due to pneumonia and whooping cough.

It is inconceivable for me to imagine the difficulties my mother faced pursuing a career in science at that time, especially physics. She was a genius, having topped almost every subject she took at university and won the state Matriculation English medal. But she was also often clearly frustrated with some of the mediocrity that surrounded her, and the lack of recognition of her abilities. Can you spot Barbara Possingham?

She promoted women in science and engineering her entire life by counselling, mentoring, and coordinating women in science scholarships. Her devotion to public service was unfailing. She coordinated South Australia’s high school physics examination and curriculum for over a decade, aside from the years my brother and I completed year 12 physics!

Her influence on hundreds of young men and women in South Australia was immense. Her influence on me was immeasurable in many ways. I am still amazed that people doubt the potential, capabilities or intelligence of women in science and engineering. I have been lucky enough to work with, and learn from, many very smart women scientists. More than half of my 80 PhD students have been women, and their contribution to conservation science has been enormous. Like my mother, these women have also been inspiring and I thank them for their persistence, innovation and insights to research.

Sadly, this is unusual. The facts are that men still significantly outnumber women in STEM fields. As the Queensland Chief Scientist one of my goals is to increase the number of Queenslanders trained in the more quantitative sciences like maths and physics. I believe the path to Queensland’s prosperity will be built by the talents of its people – and people with quantitative skills are drivers of a productive economy. Given the low representation of women in many of the more quantitative sciences and social sciences, from physics to economics, the fastest way for Queensland to increase the number of people with the skills we need to grow our economy sustainably is to attain gender equity in these fields.

Achieving gender equity in STEM will require a team effort from all of us. Together we can have the important conversations in the workplace, encourage young women, and take positive steps to remove the barriers to gender equality. Bit by bit this will build inclusivity in science which reward all of us. 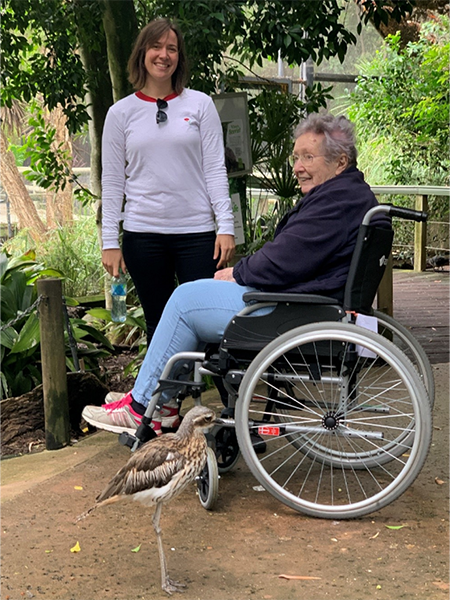 Barbara recently celebrated her 90th birthday with me, her equally remarkable grand-daughter, Alex Possingham, and a very friendly bush thick-knee at Adelaide Zoo.

In 2021, Queensland Women’s Week will be held from 3 to 14 March. It is an expansion of International Women's Day, providing for a week-long, statewide celebration of the achievements of Queensland women and girls. If you know extraordinary women in any science field, give them the recognition they deserve! The 2021 Queensland Women in STEM Prize is now accepting applications until 9 April.