Data from this collection and previous reports is available on the Queensland Government data website.

Capital investment doubled compared to the 2014–15 financial year, from $11 million to $22 million

The Department of Agriculture and Fisheries is the largest single funder with $57.5 million invested in R&D

Research was largely focused on the translation of health and biotechnology research and on developing enhanced production technologies in areas such as agriculture, mining and advanced manufacturing.

The Department of Agriculture and Fisheries is the largest single funder with $63 million invested in R&D.

As in 2015-16, research continued to focus on the translation of health and biotechnology research and on developing enhanced production technologies.

Research and development (R&D) is ‘creative work undertaken on a systematic basis in order to increase the stock of knowledge, including knowledge of man, culture and society, and the use of this stock of knowledge to devise new applications’ [Frascati Manual, 2015].

Governments invest in R&D for a number of reasons to support, participate and enable science in the community, including: 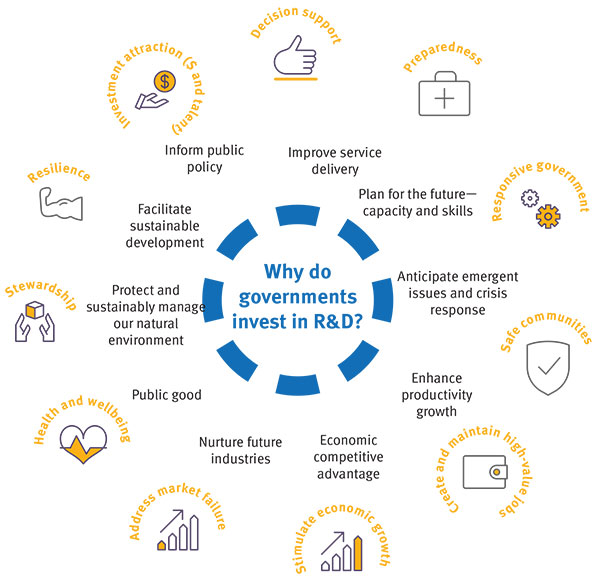 Our office collects information and data from Queensland Government departments, government bodies, and statutory authorities to understand how agencies invest in R&D.

Data from this collection and previous expenditure collections is available on the Queensland Government open data website.

Where does R&D funding come from and how is it used?

R&D funding can be separated into 2 sources – Queensland Government money and external money (what we call leveraged sources).

R&D investments can also be divided into research that is performed at government sites (in-house) and at other locations such as universities (external locations).

There are also capital or current items.

Capital items are investments into buildings or other infrastructure while current items include (among other things) investments in projects and staff.

Queensland continues to invest in R&D

R&D data has been collected since 2004 and provides important aggregated financial information on R&D investments, trends in funding and collaborations and how this spend aligns with Government priorities.

Queensland Government departments perform vital research across many areas for Queensland including water catchment work, agricultural activities and clinical development. We have been able to increase investment for work performed in-house by leveraging government funds and getting $1.55 for every dollar the government spends in 2015-16 and $1.39 in 2016-17.

While in 2016-17, $79 million was directly invested by the Queensland Government in in-house R&D activities, leveraging $109 million for a total investment of $188 million.

The Queensland Government spent $22.3 million on capital investments (infrastructure) in 2015–16 and $21.1 million in 2016-17. This is double the investment in 2014–15. This increase was largely due to funding the establishment of the Australian Institute of Tropical Health and Medicine at James Cook University–officially opened on 7 October 2016–and the Sunshine Coast Health Institute.

Other capital investments included the establishment of the Central Queensland University Engineering Laboratories at the university’s Cairns campus, the purchasing of equipment for Gamma Knife® technology and a MAGNETOM Prisma MRI Scanner at Metro South Hospital and Health Service to improve disease diagnosis and treatment and to facilitate research

Where did the money for R&D come from?

Around half of R&D investment was sourced from Queensland Government departments.

This investment in R&D enables new ideas to be developed, tested and commercially translated.

Where is R&D carried out?

Over half of the total funds invested by the Queensland Government represents R&D performed by Queensland Government departments, including $184 million in 2015-16 and $188 million in 2016-17. This in-house investment allows projects such as the Northern Fisheries Centre for aquaculture R&D to take advantage of past investments in infrastructure, and has provided the ability to house research projects in departments using facilities and field stations.

Which departments are investing in R&D?

The Department of Agriculture and Fisheries continues to be the largest provider of R&D for the Queensland Government with over a third of total investment coming from this department.

We saw increased investment from the then Department of Environment and Heritage Protection. This was driven through a commitment to the Climate Adaptation Strategy for Queensland and the Queensland Government’s $9 million (over 4 years) investment in the Great Barrier Reef Innovation Fund to develop, trial and implement innovative approaches to improve Reef water quality, such as the Innovative Gully Remediation Project in partnership with Greening Australia.

In 2015-16, the then Department of Science, Information Technology, and Innovation increased their investment in R&D by 50% from the previous financial year, continuing this investment through 2016-17. This increase was made possible by funding released under various Advance Queensland initiatives, including fellowships, scholarships and research partnerships. Investments in these programs supports collaboration between businesses and universities, focusing on a wide-range of topics including low-voltage solar batteries, small-scale housing opportunities and promoting native plant species

The proportion of investment in the field of medical and health sciences has increased and makes up 50% of the R&D expenditure in Queensland.

Funding for this field predominantly comes from Queensland Health, QIMR Berghofer Medical Research Institute and the then Department of Science, Information Technology and Innovation.

As an important part of Queensland’s economy, agriculture and veterinary sciences received 25% of R&D investment in 2015-16 and 20% in 2016-17. The Department of Agriculture and Fisheries provides most of the funding in this space.

Queensland Government partners with various groups within universities to achieve research outcomes including the Queensland Alliance for Agriculture and Food Innovation and the Queensland Centre for Mental Health Research.

Protecting our biodiversity and the Great Barrier Reef Dr David Blondeau-Patissier received an early career Advance Queensland Research Fellowship to develop an oil pollution detection system for the Great Barrier Reef, based on the use of advanced optical, thermal and radar sensors from the European Space Agency's Sentinel satellite missions. In partnership with Australian Maritime Safety Authority and CSIRO (Drs Blondeau & Thomas Schroeder), the project aims at using satellite technology to significantly improve the detection of surface oil pollution. Accurate and timely detection of such devastating events will help trigger a faster environmental response, and enhance the coastal management capabilities of the marine park. Hybrid Cooling towers research at the University of Queensland may help revolutionise energy generation in drought areas and has a goal to reduce water consumption by over 70,000 megalitres per year by 2020. The technology allows for the study and development of new methods to reduce water consumption in thermal power generation. This technology can be applied to all kind of power plants, including traditional coal plants, biomass plants and solar thermal plants. The Department of Agriculture and Fisheries is investing $3 million over three years into research at QUT to fast track the development of agricultural robots. A team at QUT, led by Professor Tristan Perez, has developed a new agricultural robot—nicknamed ‘Harvey’—to harvest capsicums. Harvey’s performance achieves a success rate of 75 per cent, compared to other robotic harvests which rated at only 33 per cent.

QUT is now in discussions with partners both in Australia and overseas to commercialise Harvey. In the future, the researchers also plan to investigate how automated harvesting technologies can be used for other crops, such as mangoes, strawberries and avocados.

SensorQ, as an integrated data collection, storage, analysis and visualisation platform, has a variety of industry applications. Sensor-Q is designed to be a low-maintenance, low-cost and simple to deploy system that can be used to solve important practical water problems for Townsville City Council and other local governments in the future. This 5-year project is done in partnership with CSIRO and the NSW Department of Primary Industries.

Led by Dr Lindsay Bell of CSIRO, the Northern Farming Systems Initiative examines how the performance of farming systems might be improved in the face of emerging challenges to grain farming. The project will compare various farming systems to help landowners achieve the full potential of their current farming system. 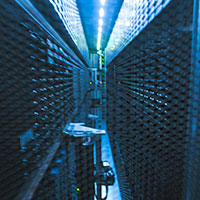 This high performance computing infrastructure at the Ecosciences Precinct in Brisbane is used to store and analyse multi-petabyte (1 petabyte = 1000 terabytes) scientific data sets including an extensive archive of satellite imagery and climate data. It is an interconnected combination of multiple computer clusters, mass data storage libraries, and links into high speed research networks and national infrastructure to enable access to 'big data' from around the world and for publishing open data for use by all Queenslanders.

The satellite imagery archive builds on the Queensland Government's continued investment in earth observation technologies. The archive contains over 80,000 Landsat satellite images for Queensland from the United States Geological Survey, and includes more than 30 years of continuous earth observation data at a 16 day (or better) interval-the longest continuous earth observation archive in history. Recently, the archive has expanded significantly through the Queensland Government's participation in a national partnership which is enabling access to the European Space Agency's range of Sentinel satellites through its Copernicus programme. Scientists analyse the data using complex algorithms to monitor and report on land cover and land use change. The outcomes inform and support natural resource and environmental management, climate change adaptation, industry development, land use planning and disaster response. Gold Coast Hospital and Health Service, in collaboration with Griffith University have developed, implemented and evaluated an intervention to improve nutrition care, delivery and intake among acute medical patients.

The intervention resulted in a 15–20 per cent increase in patients’ energy and protein intakes and doubled the number of patients eating adequately post-intervention. The nutrition research unites research projects across the areas of intensive care, oncology, public health, food services and acute care. 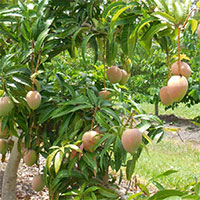 The Department of Agriculture and Fisheries is researching ways to improve the capacity of primary industries to withstand cyclonic winds. This research will identify techniques to mitigate the effects of cyclonic winds and develop new production practices to increase the resilience of tropical primary industries to withstand these winds in the future.

One of the techniques being trialled is using trellis systems for tree support.

Translation of health and biotechnology research

Dr Yah Leng Lim received an Advance Queensland Research Fellowship and has partnered with Micreo Limited (now L3 Micreo) on a project for the commercialisation of a compact terahertz laser imaging system for the early detection of skin cancer. This safe method of providing a different view of skin tissues will reduce the need for biopsies in people who present with skin cancer symptoms such as moles.

Dr Lim will work in partnership with researchers overseas to develop a more efficient cooling system for the technology and create a more compact product. The Department of Agriculture and Fisheries’ mungbean breeding efforts have continued to improve yields, grain quality and crop resilience in the face of drought and disease, with production rising from 35 000 tonnes in 2003 to more than 130 000 tonnes in 2016.

The Grains Research and Development Corporation, estimated that every $1 invested in the mungbean breeding program returned $18 of benefits to industry. 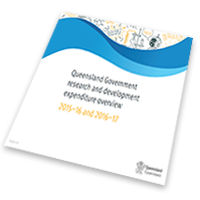