A shorter version of the data will be published biennially, with the alternate years’ publications being a more comprehensive report with case studies and highlights.

For the purpose of this report, and in line with the guidelines provided by The Organisation for Economic Cooperation and Development (OECD), the definition of R&D used by the Queensland Government is:

To fall under this definition, and therefore being eligible as R&D, an activity must be:

Some examples of R&D activities include (and are not limited to):

Approximately 94% of the total expenditure, around $416 million, was related to current expenditure. 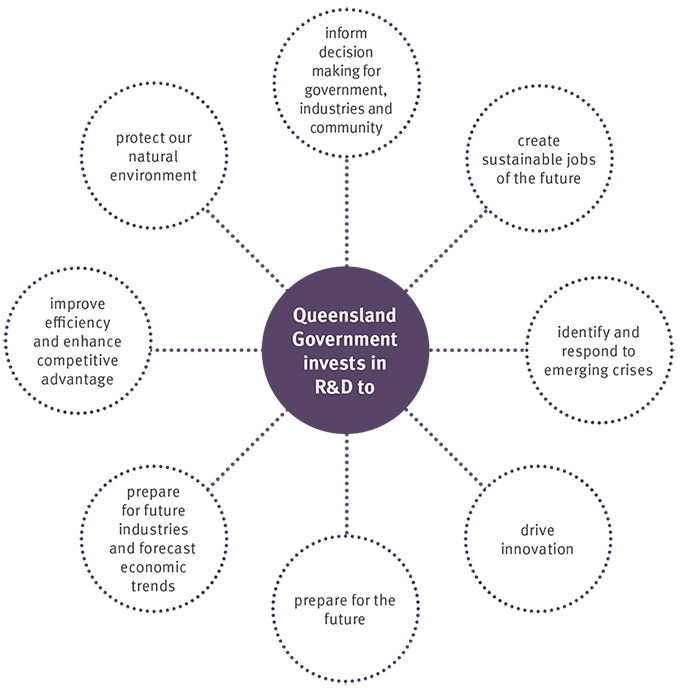 In 2020–21, Queensland Government agencies reported spending $444 million on R&D, which represents a 16% increase from the previous year’s expenditure of $380 million.

The graph below shows the R&D expenditure by Queensland Government over the last 17 years. The large spike that began in 2008–09, peaked in 2010–11 (yearly expenditure of $701 million) and finished in 2013–14 was due to significant investment in four major research infrastructure projects. Institutions such as the QIMR Berghofer Medical Research Institute, and the Translational Research Institute are two examples of this capital investment.

5. Capital vs current expenditure over time

2009–10 was the first where capital and current expenditure were reported separately. Prior to this, they had always been reported as a combined total amount.

Queensland Government agencies reported spending a total of $444 million on R&D in 2020-21. The three agencies with the highest expenditure were:

10. Spending in relation to socio-economic objectives

Agencies classify R&D investment according to the Australian Bureau of Statistics’ socio-economic objectives. The objectives relate to the impact of the research and are standardised fields. The distribution of expenditure reflects the socio-economic focus of the government policy priorities at the time.

In 2020–21 the greatest reported expenditure was allocated to health objectives. This accounted for 52% ($230 million) of the R&D expenditure for the year and was mainly due to research around SARS-CoV-19. The second largest expenditure at 15% ($65 million) was for research on plant production and plant primary products followed by environmental management accounting for 7.5% ($33 million). This is in line with what happened in 2019–20 where health accounted for 53% ($203 million) of the overall R&D expenditure, followed by plant production and plant primary products at 18% ($71 million) and environment at 6% ($25 million).

11. Spending based on field of research

Similar to socio-economic objectives, fields of research are also defined by the Australia Bureau of Statistics. This categorisation of R&D activities is done following the methodology used—not the activity nor the purpose. In 2020–21 the top three reported field of research were: Biomedical and Clinical Sciences accounting for 28% ($125 million), followed by Health Sciences accounting for 23% ($102 million) and Agricultural, Veterinary and Food Sciences accounting for 22% ($97 million). This shows that 73% of the total expenditure is concentrated in three of the 23 fields of research. This mirrors the highest spending agencies, namely Queensland Health, the Department of Agriculture and Fisheries, and QIMR Berghofer Medical Research Institute. This trend is in line with what was reported in 2019–20 where Medical and Health Sciences account for 52% ($200 million) of the overall expenditure, followed by Agricultural and Veterinary Sciences at 21% ($23 million).

12. Spending based on state priorities

The chart below reports the weighted percentage of the state priorities for 2020–21. The highest percentage was found for ‘Backing our frontline services’ accounting for 22%, followed by ‘Protecting the environment’ at 15%, and ‘Safeguarding our health’ at 11%. The chart reports a more balanced distribution compared to 2019–20, where ‘Keep Queensland healthy’ accounted for 51 per cent of the total state priorities.