What factors contribute to floods?

Rainfall is the most important factor in creating a flood, but there are many other contributing factors. When rain falls on a catchment, the amount of rainwater that reaches the waterways depends on the characteristics of the catchment, particularly its size, shape and land use. Some rainfall is 'captured' by soil and vegetation, and the remainder enters waterways as flow. River characteristics such as size and shape, the vegetation in and around the river, and the presence of structures in and adjacent to the waterway all affect the level of water in the waterway. 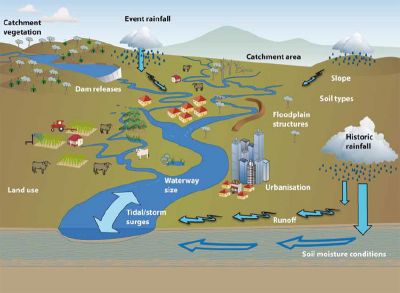 Figure 3. An illustration of the factors that contribute to floods. These factors vary between locations and times, meaning that no two floods are the same. Conceptual diagram developed using the Integration and Application Network (IAN) tool.

Rainfall is the most important factor in creating a flood

Put simply, floods occur when the amount of water flowing from a catchment exceeds the capacity of its drains, creeks and rivers. This process begins with rainfall, but is affected by many other factors.

In Australia, flooding is heavily influenced by our naturally high rainfall variability which, relative to other parts of the world, leads to a much higher variability of the amount of water flowing through our waterways. A major factor in this variability is the El Niño – Southern Oscillation (ENSO) effect (see Figure 4).

The atmosphere and the oceans interact strongly to influence our weather. 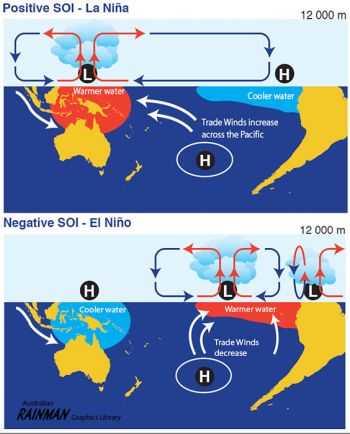 Much of Australia's rainfall variation from year to year is caused by the natural climate phenomenon known as ENSO, the El Niño – Southern Oscillation. ENSO's 'see-saw' variations are intimately related to variations in the atmospheric vertical circulation along the equator over the Pacific. This circulation, known as the Walker Circulation, is caused by differences in sea surface temperatures between the eastern and western Pacific along the equator.

During 'normal' circulation warm, moist air travels west across the Pacific and rises over Indonesia, producing cloud and rain. The airstream then becomes comparatively dry and moves east at high altitude (approximately 12,000m) and sinks over the normally cold waters near the South American coast. 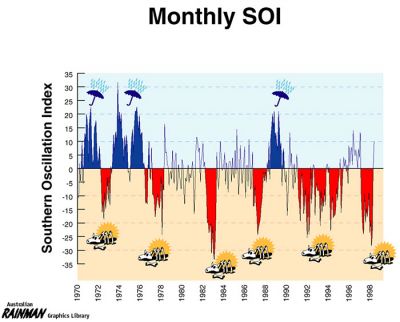 When the equatorial ocean surface off the coast of South America is abnormally cool, the Walker Circulation is strengthened. In this situation the SOI is strongly positive, and the trade winds blow strongly across the warm Pacific, picking up plenty of moisture (Figure 4a). This increases the likelihood of eastern Australia experiencing above average rainfall, and is called a 'La Niña' event.

On the other hand, when the ocean surface off the coast of South America is abnormally warm, the air pressure between the eastern and western Pacific equalises or becomes a negative value, weakening or reversing the trade winds. This situation, which is a weaker than normal Walker Circulation (Figure 4b), is accompanied by a strongly negative Southern Oscillation Index and is called an 'El Niño'. In Australia this usually results in below average rainfall, and if this trend persists we can slip into drought. The SOI helps tell us how 'strong' a La Niña or El Niño event is. For example, when the SOI is consistently strongly positive (i.e. La Niña and above average rain) we may experience flooding. When the SOI is consistently strongly negative we risk entering into periods of drought (Figure 4c).

In Queensland, average annual rainfall ranges from very low values in the southwest, to very high values exceeding 2000mm per year along the coast (Figure 5). However, even in those areas with generally low rainfall, relatively heavy rainfall will occur in some years, causing flooding (Figure 6).

When rain falls on a catchment, the amount of rainwater that is converted into flow down rivers and other waterways depends on the characteristics of the catchment.

Some rainfall is captured: A portion of the rain that falls on a catchment is captured by soil and vegetation. Generally, the more rain that falls in a particular area in a given period of time, the lower the proportion that can seep into the ground or be stored on the surface.

The greater the rainfall intensity, the greater the potential for runoff. How long it rains, and the area covered by the rain, are also important.

The more vegetation there is in an area, the greater the amount of rainfall that is captured and the less water there is available to flow over the surface. Natural and artificial storages like farm dams and rainwater tanks have a similar effect in reducing runoff.

The soil types in a catchment, land use and weather conditions prior to a rainfall event are also important as they control the amount of rainfall that can infiltrate into the soil, and hence the amount of rainfall which becomes flow. If a large storm is preceded by a period of wet weather, then the ground has little capacity to absorb further rainfall, and a higher proportion of the rainfall will flow across the land surface and into waterways. The construction of areas that cannot absorb water, such as roofs and roads, will also result in reduced infiltration and more rainfall being turned into runoff.

Rainfall that is not captured enters the waterways: Once water begins flowing in a catchment, various factors determine how much flows downhill into successively larger waterways, and how quickly it moves.

Typically,larger catchments result in greater streamflow if widespread rainfall occurs for a long time. The steeper the catchment area, the faster the runoff will flow.

Floods are also affected by the roughness of the terrain being passed over. Dense vegetation and artificial obstacles such as fences and houses will slow down water flow, often leading to lower flood levels downstream.

Swamps and natural ponds or lakes have the capacity to store floodwater and release it slowly. Artificial structures such as dams or detention basins (small reservoirs) can also store water for a period of time, and reduce the peak of downstream flows while extending the duration of an event. All such structures have a finite capacity and there is a limit to the volume of catchment flow that can be stored.

The capacity of drains, creeks and rivers within a catchment to carry flows depends on a number of factors:

Size and nature of the river: Put simply, the bigger, straighter and smoother a river, creek or other channel, the greater its capacity to carry water and the less prone it is to flooding. Any process that reduces this capacity, such as the placement of structures in the channel, encroachment by development or build up of sediment, contributes to increased flooding.

Vegetation in and around the river: Plants in a river or on its banks slow the speed of the water flowing in it. The slower the water moves, the higher the water level, and the greater extent to which the floodplain surrounding the river will be inundated. This can reduce downstream flood levels and flows. Plants also reinforce river banks, decreasing erosion and increasing the deposition of sediment.

Once a river overtops its banks, the maximum flood level reached depends greatly on the nature of the adjacent floodplain. For example, wide, flat floodplains can store a greater volume of floodwater than steep-sided valleys, and the resulting floods move more slowly. Modifications to floodplains such as clearing of vegetation or the construction of embankments (for example,for a flood free road or rail corridor) can impact natural drainage patterns and processes on river floodplains.

Structures: Structures that are placed in a creek or waterway, for example culverts in an urban drainage system or bridges in a river, reduce the water-carrying capacity of the waterway and may contribute to flooding. Debris can also become entangled on these structures, worsening this process.

Levees along a waterway are designed to protect areas 'behind' the levee from floods up to a certain level, but their constraining influence on flood flows can cause upstream flood levels to be higher than they otherwise would be. Road and railway embankments, with insufficient cross-drainage capacity (for example, use of culverts), can block off parts of the floodplain with a similar effect. Once levees or embankments are overtopped or breached, the way floodwaters spread over a floodplain can alter significantly and the impact of flooding is often severe.

Downstream water levels: The capacity of waterways can also be affected by the water level in the ocean or lake they are flowing into. For example, a king tide or storm surge can hamper the release of water from a river into the ocean. A similar effect can occur near the junction of creeks with rivers, where backwater effects from river flooding can extend a significant distance up the creek.