What is a flood?

When water inundates land that is normally dry, this is called a flood. Floods can be caused by a number of processes, but the dominant cause in Australia is rainfall. Floods are a natural process, but mankind's activities affect flooding. Floods occur at irregular intervals and vary in size, area of extent, and duration. 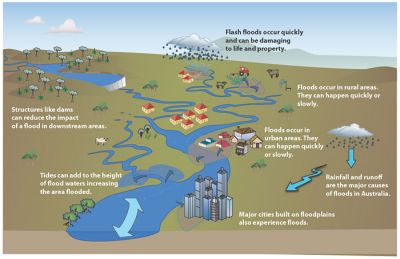 Every flood is different. They can occur suddenly and recede quickly, or may take days or even months to build and then discharge. They occur at irregular intervals, and many decades can pass between significant floods. On the other hand, there are many examples of several large floods occurring within short periods of time.

In Australia, many people live on land that is subject to occasional flooding, known as floodplains. Cities and other settlements have been constructed on floodplains to take advantage of access to water and good quality farmland.

Floods in Australia are usually caused by rainfall

Floods can be caused in a number of different ways; however the dominant cause of flooding in Australia is rainfall.

When rain falls over an area of land, some is absorbed by the soil, while the rest becomes runoff and flows downhill. The area of land that contributes runoff to a particular point is called the catchment.

Floods can also be caused by other mechanisms. Recent international events have highlighted the risk of flooding from tsunamis. Large tides and storm surges can also flood coastal areas. Inland earthquakes, volcanoes or land slips can also cause flooding, as can breaches/releases in natural or man-made barriers to flooding such as dams and levees.

Heavy, intense rainfall can occur suddenly, and the quickly rising floods caused by this in the minutes or hours after the rainfall are known as flash floods. Flash floods are typically associated with relatively small catchment areas where there may be little or no permanent flow of water. As there is little time to react, flash floods are particularly difficult to predict and manage in real time, and this is discussed further in Question 4 and Question 5.

In larger catchment areas, rainfall can build up over hours, days or weeks. The runoff from this rainfall flows across land and then down gutters, drains, gullies, creeks and rivers and may create significant floods that inundate large areas of land for days, weeks or months.

With more time to react, flood warning is more effective for these types of floods, as described in Question 4 and Question 5.

Sometimes, a flash flood in the upper reaches of a river system can evolve into a more general river flood as it joins with other inflows and spreads out as it travels downstream.

Many locations can be affected by both flash floods and the more general river flooding. For example, a particular residence might be potentially affected by a flash flood through the local gully, or a river flood from the nearby major river, or a combination of the two.

Floods are a natural process

Floods are a natural process, and our ecosystems, river systems and estuaries have adapted over long periods of time to depend on an irregular pattern of large floods. Many species, such as River Red Gums, rely on Australia's pattern of dry periods separated by periods of intense rain and overbank flooding.

We make a lot of changes to our catchments including land clearing, urban development, dams, that can change the impact of a flood on the natural environment.

Floods can vary in size

The size of a flood event, or its magnitude, can be expressed in many ways. The peak level of the water at a particular location in a waterway is the most unambiguous way, as it is relatively easy to measure and is the principal driver of flood impact. The flood magnitudes are usually classified by their height, and the Bureau of Meteorology uses three general categories of flooding related to water level:

Figure 2 shows these general categories as they pertain to the main Brisbane stream, or river, gauge. A stream gauge is a device used to measure the height of water in the river, and there is a network of gauges throughout the Brisbane River catchment. The values on this chart are in metres above the reference level defined for this gauge. It is important to note that the river heights for minor, moderate and major flooding are different for different waterways, depending on their individual characteristics.

Other important characteristics of floods that contribute to their severity include:

Figure 2 also illustrates the sporadic nature of flooding, showing the historic record of river levels at the Brisbane City gauging station since 1840. As illustrated, six major floods occurred in Brisbane between 1885 and 1910, followed by more than 60 years without a major flood.

The chance of a flood of a certain level occurring is usually referred to in terms of the likelihood of that level being exceeded in a particular year, or Annual Exceedance Probability (AEP). Question 6 provides further information on what AEP means, and how it is estimated and used.