Meet the Artists from the 2018 Artist in Residence Science Program
Issued: 29 Oct 2018

The Artist in Residence Science program promotes the role and value of arts and science as key drivers of discovery and growth across Queensland.

The Artist in Residence Science program promotes the role and value of arts and science as key drivers of discovery and growth across Queensland.

By nurturing our collective and creative intelligence, the program works to understand the environmental challenges we face.

“The ground that we walk on is a constant reminder of deep time — or geological time. The ground we walk on isn’t stable — it shifts and changes shape. It just does it so slowly that we don’t realise it. But human-caused issues like erosion and soil change and movement, disrupt geology’s natural movements and can contribute to environmental degradation.”

Alinta Krauth uses her practice to highlight environmental degradation. She specialises in interactive projection mapping, which allows people to interact with augmented surfaces, but it also means she does a lot of animation-making and other digital creation processes.

For this residency she experimented with interactive biofeedback technologies, sound art, and interactive animation for touchscreens. She spoke to a range of scientists in the soil department, and produced three artworks for the Art meets Science Exhibition:

This artwork asked the question, ‘what would a digital artwork look like if it underwent a soil sampling process?’ Alinta took the soil sampling, crushing, and sorting methods that she had learnt in the soil lab and created a sort of mythopoeic methodology for creating a digital work using the same methods.

These artworks took biofeedback technologies, which are usually used to visualise human vital signs, and applied them to geologic actors such as soil, and the things that can be found in soil such as rocks.

This was done in order to make data-sonification sound art. Concepts of ‘grounding’, as well as the issue of anthroposol — a new soil type influenced by human activity — inspired this process.

“The work is an embodied experience of data. So people get a sense that data is real, and that’s important because data is everywhere and more and more common these days but we tend to forget about that and ignore its presence.”

Jen is a new media artist. She creates interactive digital art systems. Interactive art is a new area that is still in its infancy. For Jen it’s about conceptualising what might be possible in this medium, and to sculpt experiences that are also thematically informed. Some core themes driving her work are emergence, landscape, embodiment, data and expressive interfaces.

In her residency she met with the engineers, scientists and technicians of the Coastal Impacts Unit at the Queensland Hydraulics Laboratory to learn about the processes of modelling, monitoring and understanding our coastal waters. Jen’s art piece “Ruby Corrents 2.0” has integrated live wave data drawn from the local Brisbane buoy into her dynamic, responsive art. That data drawn shapes visual imagery of the work, changing and updating imagery as the data changes and updates, evoking a sense of the water moving.

“Art and science can be fun and accessible for people of all ages. Both artists and scientists share a spirit of experimentation and curiosity about the world around them, which drives their process.”

Nadine is an artist and educator who experiments with the in-between world of art, science and technology. She partners with communities to create participatory and sustainable experiences that evoke wonder and an appreciation for the natural world using colour, light and shape. Her artwork takes the form of sculpture or installations using mixed media, particularly plastics, to examine the relationship between humans and nature and the (mis)use of resources.

During her residency Nadine worked with the Chemistry Centre and the UQ School of Biological Sciences. She produced various artworks and a performance piece.

Water Jars is the culmination of an art and science learning experiences between local school students and soil and water scientists from the Chemistry Centre. This piece comprises over 50m of French knitting woven from upcycled t-shirts and dyed in the colours of the Hydrangea flower. The etymological meaning of Hydrangea stems from the Greek words for water, hydros and jar, angos. Soil pH affects the availability of aluminium in the soil, which indirectly changes the colour of some varieties of hydrangea, namely Hydrangea macrophylla. Blue flowers can be induced in acidic soil (pH 5.5 and lower) as aluminium is more available at the roots. For pink flowers, hydrangeas need neutral to alkaline soils (pH 6.5 and higher) and for purple flowers the pH must be between 5.5 and 6.5.

Students working alongside Nadine to create the artwork Water Jars

The uptake of dye in the fabric references the physical appearance of paper chromatography, another area of science which the students participated in.

Soil scientists collect core samples of soil by drilling into sediment or rock with a hollow steel tube called a core drill. 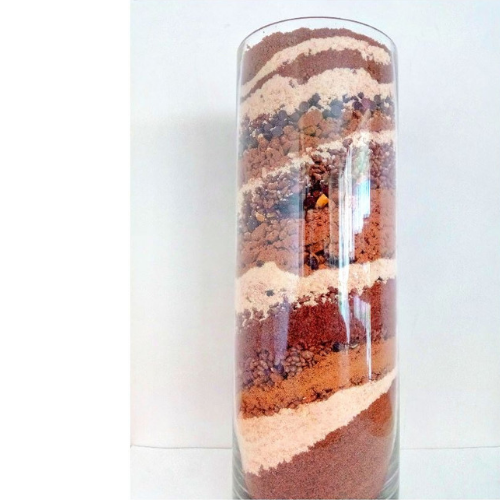 This produces a cylindrical section of soil that can enable you to see the different horizon levels or soil profiles.

Viewers are invited to engage in a conversation on resource use and our impact on the world around us.

“Hopefully they find the animatic cute, fun, interesting and were able to learn something about percentiles.”

Tessie is a New Zealand born animator/illustrator who loves drawing, animals and spending time in the outdoors.

She is currently undertaking a PhD at the Griffith Film School, exploring how storytelling in animation can be used to communicate environmental messaging.

Tessie presented an animatic (video storyboard) and development art for the animation project she is currently working on ‘This season might not be as great as you think it is Jim!’ Storyboard Panel from animation “This season might not be as great as you think it is Jim!”

The animation centreson a conversation between two graziers in rural QLD, Mick and new kid on the block, Jim.

Mick teaches Jim how to read a rainfall percentile map, helping him understand the current rainfall for his region and how it compares to previous rainfall records.

The animation,which will be released later this year, is designed to aid understanding of percentile statistics within the context of rainfall maps.

The Bloom Collective came together in 2017 as a Brisbane-based multi-arts collective interested in rethinking relationships to particular environments. Using performance as a central creative element, the artists place themselves in landscapes, engaging in sites with ritual attentiveness.

The Bloom Collective has primarily engaged with the Department of Environment and Science in this residency, looking closely at the process of land erosion. Using the Withcott site as a starting point, the artists spent time with scientists at ESP as well as field trips to Withcott to experience and reflect upon the formation of gullies. Of particular interest were words — gullying, dissolving — and the exquisite beauty discovered in the erosion process. The Bloom Collective “The Wrong Kind of Beauty”

They produced The Wrong Kind of Beauty, which is the collective’s embodied, experiential response to the fragility of the landscape produced by the gullying process. The harrowing and ongoing drama of the landscape, simultaneously reveals moments of delicate sculptural beauty, explored here through poetry, movement, sound and visual documentation.